"The title of our new album means that from the beginning of our lives we have had fears. They may change over time, but they are always at our side. They are always there and they accompany us until our death." Michi Lettner, singer and bassist of MARATHONMANN, describes the theme that the German post-punk band is focusing on in their new work as a very personal concern. Guitarist Leo Heinz adds: "The subject of fear is so big and wide. What appears to one to be secondary is hardly pronounceable for the next. The important thing is that everyone deals with it and learns to deal with their fears." The fourth MARATHONMANN album makes no difference between interpreter and listener. It is not about standing on a pedestal and preaching what is right and what is wrong, but about admitting fears and confronting them together. Drummer Jo Scheer finally sums up the meaning of the album: "This feeling of having to prove something to someone - that wasn't there. We used to do all this just for ourselves to process things. Our emotions and thoughts, but also our own fears. It helped us and that's how music has to work." MARATHONMANN deliver a gripping performance with "Die Angst sitzt neben dir", rousing and profoundly personal album.

In contrast to earlier releases MARATHONMANN needed some time tow rite "Die Angst sitzt neben dir". Jo explains: "We wanted to approach the matter as clearly as possible. That's why we took a little break. No rehearsals, no songwriting, no typical band life. Before it got too much, we said to ourselves: let the latest events and experiences sink in. "When we feel fresh and ready, we'll sit down and write album 4." The result is 100 percent MARATHONMANN, but also because it sounds like no other release before. "MARATHONMANN always sounds like MARATHONMANN to us. Nevertheless, we never want to copy ourselves or stagnate musically. We are also personally developing and this is reflected in the new album - more than any other album before", Leo explains. Despite the unconditional will for further development, the new album for Michi is more immediate and natural at the same time: "We just started writing on it. It just had to come out without thinking too long about it. In the end, we just wanted to be proud of it.

At the end of this creative process there is a sophisticated and multi-layered album. But before anyone thinks of stadium or prog rock, it should be assured that the guys from Munich have retained their emotionality and the unadulterated energy of punk, which the first single "Schachmatt" proves in particular. "The song is about the question of why things happen and who makes all these rules. You're often helpless and you´ve got the feeling that you can't do anything against it. Everyone knows this fear of being helpless", Michi explains the content of the song. With an exclusive B-side, the pre-release track will be exclusively available as 7" vinyl on their tour with ROGERS in April. Since punk is no longer the only fixed point for MARATHONMANN 2019, "Die Angst sitzt neben dir" is above all very versatile. While "Nie Genug" is aggressive but also catchy, songs like "Die Bahn" and "Tausende Augen" show the more vulnerable side of the band. "Flashback" combines all qualities.

After MARATHONMANN have taken the time to work on their musical vision, the guys of course want nothing more than to get out on the street with their new album and present it live to their fans. After the tour in April and tons of festivals this summer, MARATHONMANN will also hit the road for a headliner release tour in fall. Michi can hardly wait for the months to come: "We are very proud of our new album." 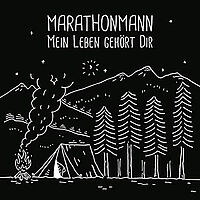